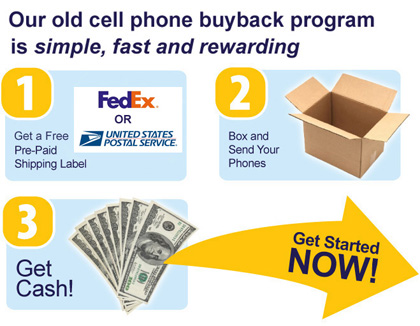 Recycling is one of the biggest and highly important advocacies of today. It is logical, simple and very easy to do. Numerous environmentalists all over the world are encouraging people to save the planet by not carelessly throwing their used stuff especially electronic gadgets as cell phones or computers and instead recycle them.

Millions of mobile phones are just thrown away like this due to the fact that they are old and unfashionable. It is estimated that, on the average, American cell phone users replace their old phones every 18 months. There are now about 1 billion used cell phones all over the United States, hidden in drawers and lockers, and all but forgotten by the owners of these phones. Every year, we discard and replace 100 million used cell phones and the sad part is, less than 20 percent of these are recycled or sent back to manufacturers. Consequently, the planet suffers from the eventual land contamination by toxic materials present in the components of the handset. These materials will eventually break down or leak, exposing the, air, water and land to dangerous chemicals that disturb the delicate balance of nature.

Recycling cell phones means less money and energy has to be expended for the mining of the various minerals which are consumed during the manufacturing process for the production of mobile phones. If we take a recycle initiative then this means that we will reduce the amount of land that has to be set aside specifically as landfill zones which in turn can be used for far more productive and socially beneficial usages such as low income housing, more farming, or renewable energy power supplies.

So if you still have some old and unused phones lying in your obscure drawers then we at PaceButler Corporation could help you make the best use of these cell phones. PaceButler Corporation is at the forefront of the cell phone recycling industry in America, delivering a proven method for re-selling or recycling used cell phones to thousands of consumers and non-profit groups nationwide.

Pacebutler Corporation is committed to help protect the environment and our health, through cell phone recycling. In some instances, when the cell phones shipped to us can no longer be reused, these are processed for recycling and responsible disposal. This strategy provides a fair-market price to consumers for the purchase of their old cell phones. It also prevents unused cell phones from being dumped into public landfills, where their toxic components could pollute precious groundwater supplies and poison the local ecosystem.

We are currently working with the country's leading mobile phone recycler, the American Cell Phone Drive, to make sure that the non-working phones are handled safely and properly and not just dumped in a landfill somewhere, where they can potentially pose a serious threat to the environment and people's health. Recycling your cell phone at Pacebutler Corporation makes sense on so many levels - from environmental, health, financial and right through to humanitarian benefits. It's a great way to get rid of unwanted used cell phones cluttering your drawers and getting paid for those, at the same time. If you've been thinking to make the best use of your old cell phones then go ahead read on our 3 simple steps and get started now.

Pacebutler Corporation is the organization, which helps making the entire process of recycling cell phones quite convenient and simple for consumers. By doing so, the company is ultimately supporting a more sustainable and greener environment. At Pacebutler, we always offer our customer the best deals when they mail out and sell their old cell phones to us for cash. Be sure to keep www.pacebutler.com bookmarked and we are so confident that if not today itself, you will use us definitely in the near future to get rid of your outdated cell phones. Visiting our website would enable you to have a complete understanding of our business and knowing more details about us. You may also have a look at the testimonials from our previous customers. The entire team of PaceButler assures you that your old cell phone is in totally safe handsï¿½after all it is so crucial for the safety of our environment and our future.